The weather was gray and they were calling for 20 knot winds out of the south as we headed out of Back Creek. Despite all the drama with the weather, ratings, class splits, a jammed spinnaker pole, a blown vang, one knockdown, and no @SlyFox IPA, we had a lot of fun Saturday and congratulations to the crew for some outstanding work! We took 2nd place in PHRF A0. The crew worked incredibly well together, supported each other and made it look easy.

It was exciting good to get the boat out in some heavy duty conditions.  I've been impressed with how well the boat sails - we had that puppy pretty loaded up and it was rock solid. According to Thomas Point Light, we had 14 - 24 knots of wind. We had a good start and I was very pleased to see that we had no problem keeping pace with the Farr 40's both upwind and downwind.

We were probably beating into 18-20 knots of wind when we blew the vang.  As we approached the windward mark, the wind went a little light. Despite some spinnaker pole issues, Geremy, and Chris cleaned things up quickly and we gained on the Farr 40's on the downwind leg.

We switched to up to the J2 headsail at the leeward mark as the breeze increased and we were a little overpowered. As we turned into the Severn at R2 the breeze was probably blowing over 25, we put the spinnaker up and we hit 12 knots of boat speed, we rounded up and the spinnaker got wrapped around the headstay, we cleaned up the mess - took the spinnaker down and headed across the line.

We finished shortly behind the Farr 40's and corrected to 2nd Place.          We lost to Wahoo by a little over 2 minutes on corrected time over a 19 mile course.

Popular posts from this blog

Monohull LIne Honors in Down the Bay 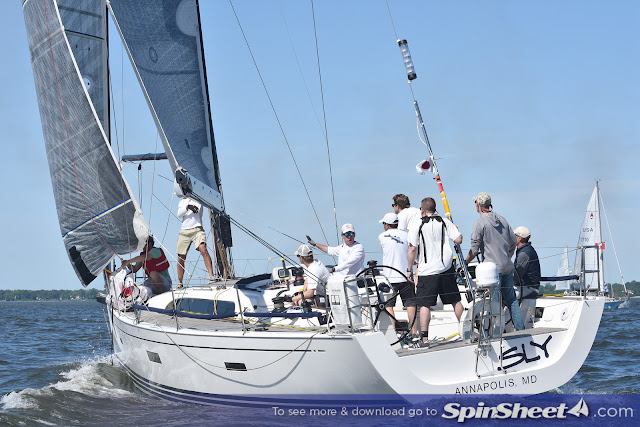 Here are a few pics of SLY at the start of the Down the Bay Race held Memorial Day Weekend. The weather was great!  We saw 15-25 knots out of the NNW for most of the ride and the wind went very light and started shifting to the S when we got to the lower portion of the Bay. We crossed the finish line at 0340, behind two trimarans. We corrected to 2nd in the ORC Division - (there were only 2 boats). You can see more great pics from Spinsheet here. https://spinsheet.smugmug.com/SpinSheet/2019-Events/2019-Down-the-Bay-Race/
Read more

Back in Business, ...well almost! 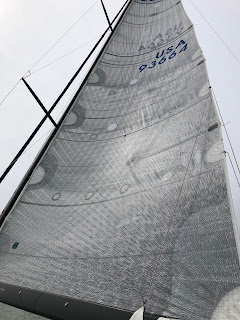 SLY is back in the water. We put the Offshore main on and it looked pretty good, shows some use, but appears to be worthy. Friday it was cold with a great breeze. We attempted to calibrate the instruments but found the Analog Expansion Module was shot and we were not getting any wind or boat speed data.
Read more